Warning: sprintf(): Too few arguments in /home/customer/www/velocelaser.co.uk/public_html/wp-content/plugins/wpseo-local/src/presenters/geo/position-presenter.php on line 38

Before you say ‘hit me with your laser beams’, you might want to gen up on how that little ray of light actually zaps that ink right out of your skin. So, we’ve put our teacher heads on and put together a short guide to the science behind our clever little machine.

The People Behind the Science

At Veloce Laser Removal Clinic, we use Quanta Systems laser tattoo removal equipment, and in terms of innovation in surgical and aesthetic laser treatment, they’re hard to beat. For you, this means you’re getting one of the best treatments on the market for your tattoo removal. Not only is Quanta Systems one of the world’s leading developers of state-of-the-art laser technologies, but they’re also the holder of several patents for inventions in the laser treatment field, boasting an enviable portfolio of laser treatment systems used in over 100 countries. It sounds impressive because it is!

We decided that the Quanta Plus would tick the boxes for our clients as this machine has the best outcomes for successfully removing tattoo ink without damaging the skin. It uses short pulses of high energy light to remove your tattoo, ensuring your skin doesn’t get overheated and damaged. We think that avoiding damage to the skin is paramount. Whilst those short bursts of light don’t damage your skin, they do target that unwanted ink. For a better idea of how, let’s look a little closer at your skin.

Your skin is the largest organ in/on your body and is made up of 3 layers. You’ve got the top layer called the epidermis, the bit in the middle, which is the dermis, and the base layer, which is the subcutaneous tissue. Don’t worry about what the names mean or what each layer is made of – you don’t need to know that much (thank goodness).

What you do need to know is that when you get a tattoo, you’re injecting ink into the dermis layer of your skin, where it stays trapped underneath the top layer, or epidermis.

You might have noticed that your tattoo has faded or become fuzzy over the years. This is a natural breakdown of pigment due to factors such as age-related changes in the elasticity of the skin, general skin abrasion and sun exposure. However, the ink stays in the dermis and the only way to get rid of that ink is to get down to that dermis layer of skin and break it down.

The Bit about the Laser Beams

Now, you might be surprised to hear that the first laser tattoo removal session happened way back in 1967! However, early laser treatments weren’t as safe and effective as hoped, so more research and development needed to be done to improve the technology. It wasn’t until the mid-nineties that scientists developed safe laser techniques, and today’s lasers are much less likely to damage the skin. When the light from the laser reaches the dermis where the tattoo ink lies, the pigment soaks up all that light. This leads to the pigments shattering into much smaller fragments. These smaller fragments are then carried away by the body’s immune system over the following weeks, leaving your tattooed skin looking lighter as the ink is slowly absorbed into the body and disposed of with other toxins. Here’s a great illustration that shows the process clearly. 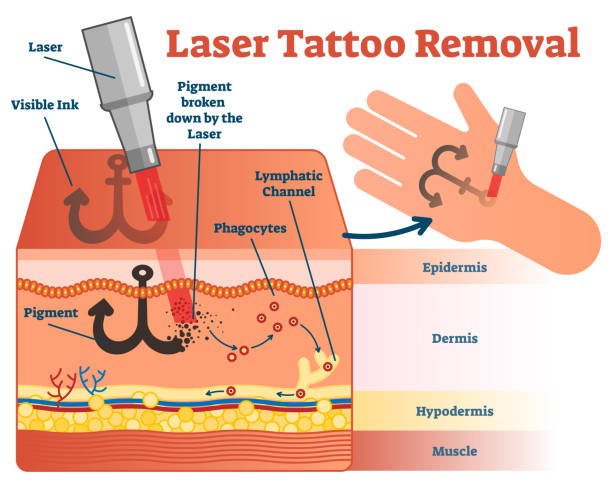 Laser Tattoo Removal for You

The number of treatments isn’t the same for everyone as it depends on your individual tattoo. You can find out more about the specific treatment required for your tattoo removal by contacting our experienced and friendly staff. They would love to hear from you and can answer any questions about the treatment, explain anything you need to know, and book you in for a first consultation. So, don’t delay; you’re just one laser beam away from saying goodbye to that unwanted tattoo!